Botswana – One of the Best Tourist Destinations in Africa 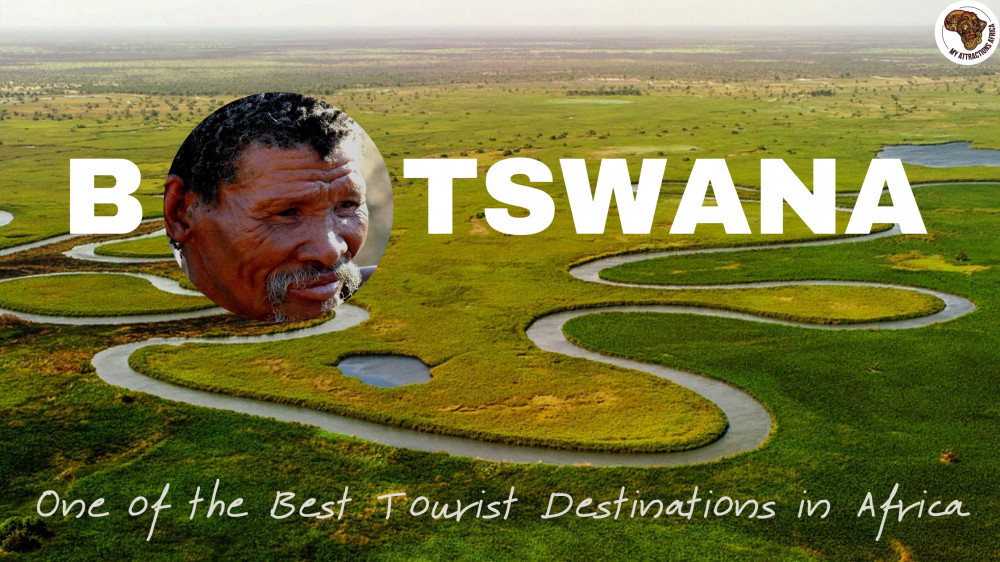 Chobe National Park, the Kalahari desert, Tsodilo Hills and the Okavango Delta are the landmarks that make Botswana one of the best tourist destinations in Africa.

Botswana is a popular destination for wildlife filmmakers, including Dereck and Beverly Joubert of National Geographic. The beautiful landscapes, natural beauty and natural resources of the country make it one of the top destinations in Africa.

About the Republic of Botswana

Botswana shares borders with Namibia, South Africa, Zambia and Zimbabwe. Despite being landlocked and being one of the most sparsely populated countries in the world with just 2.3 million people, it is a middle-income country, with a fast-growing economy.

Apart from tourism, the economy is dominated by cattle raring and mining.

Jwaneng Diamond mine is known to be the most productive diamond mine in the world and is located in this beautiful country. Botswana is the leading diamond producer in Africa, and second after Russia in the whole world.

The third-largest diamond named the Lesedi La Rona – with a carat weight of 1,111 – was found in Karowe diamond mine. This rough diamond was later bought by a British jeweller for USD 53 million.

The Best Time to Visit Botswana for Tourism

The fact that the most significant part of the country is covered by a desert, wilderness areas are visible, and the weather is dramatic. However, October is the hottest month of the year. It is also the peak period when many tourists are in the country. This means that if you are to visit Botswana during this month, you have to make your lodge accommodation arrangements in advance.

For the best game viewing, the dry season which runs from April to October is the right moment. This is when animals move looking for the few water holes. The famous safari to book during this time is the Okavango Delta Mokoro Safaris.

The wet season runs from November to March, and this is not the best time to move around the national park. However, this is the best time for bird watching, especially in Okavango and Moremi, where there is high humidity.

Chobe National Park is a beauty to behold because of the many waterways it has. The Chobe River flows through the national park, drawing many animals and birds, especially during the dry season. Bird lovers are assured of having a great time. The scenery of the park allows for excellent photographic moments.

Chobe National Park is known for its boat cruises, and game drives along the river. It is among the best national parks in Southern Africa, with some calling it the wildlife paradise.

The gateway to this national park is a town called Kasane, which is near the borders of Namibia, Zambia and Zimbabwe. Accommodation can be got from this town, or from the national park. Guest like the Chobe National Park accommodation because of a combination of unfenced camping, eco-lodges, houseboat stays, luxury lodges, tented camps and photographic safaris.

With over 50,000 elephants, this large population of elephants is what attracts tourists, especially big game lovers, to this national park.

The Okavango Delta is the most significant inland delta in the world with hundreds of channels through its dense reeds. This makes it the best place for power boating where you can catch sight of wildlife like crocodiles, elephants, hippos, and sitatunga antelopes. I highly recommend you to carry your camera and binoculars.

The Marsh Pride lions are among the strongest in Africa. Their hunting in the deep waters and thick marshland have developed them into mighty hunters capable of taking down elephants.

When you take the Okavango Delta Safari, you get to reach the Moremi Game Reserve which is renowned for leopard sightings. Flying over the Okavango Delta aboard a hot air balloon guarantees give you a splendid view of the wildlife in the area and the breath-taking scenery.

Extending to about 930,000 square-kilometres, the Kalahari is a big semi-desert that not only is in Botswana but also reaches Namibia and South Africa. It is home to migratory birds and predictor animals like cape wild dogs, cheetahs, leopards, lions, brown hyenas and spotted hyenas.

The Kalahari Desert is also home of the San Bushmen, who have occupied this land for a long time. Over time, they have polished their survival skills from generation to generation. The San Bushmen are believed to be one of the oldest cultures on Earth.

Tourists can have an experience with the Bushmen by travelling with them and learning their gathering and hunting techniques. They also have their own dance that is quite entertaining. You can also spend a night in a Bushman Hut.

However, the discovery of diamonds in the Central Kalahari Game Reserve in the 1980s led the Botswana government attempting on several occasions to displace these bushmen. 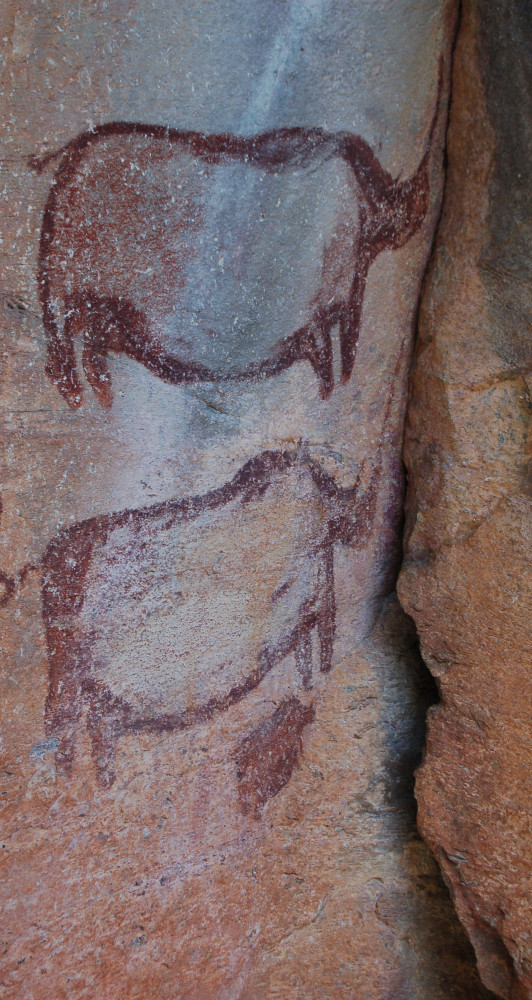 Tsodilo Hills also referred to as the Louvre of the Desert, have over 4,500 paintings and are one of the highest rock art concentrations in the world. These hills are located in the Kalahari desert.

The Bushmen attach a lot of value to the Tsodilo Hills, which are comprised of four large rocks. They believe these hills are the resting place for the spirits of the dead. Near the top of the bigger rock is where the most sacred place is located.

The Tsodilo Hills are boasted by 500 individual sites which represent many years of human habitation. These paintings are believed to be more than 20,000 years old. Archaeologists record that the area gives a chronological account of environmental changes and social activities going beyond 100,000 years.

Botswana’s annual summer Burchell’s Zebra migration is the most massive zebra migration in the world between the floodplains of Chobe near the Namibia–Botswana border to the Makgadikgadi area via Savute. The distance they cover is around trip estimated to about 500 kilometres. They move in search of fresh grasses for grazing.

Meno a Kwena camp situated along the Boteti River is strategically located to capture the view of the Okavango Delta, Central Kalahari, Makgadikgadi Pans and the Nxai Pans National Park and Game Reserve. It is a popular viewing point of the beautiful spectacle of the Burchell’s Zebra migration. 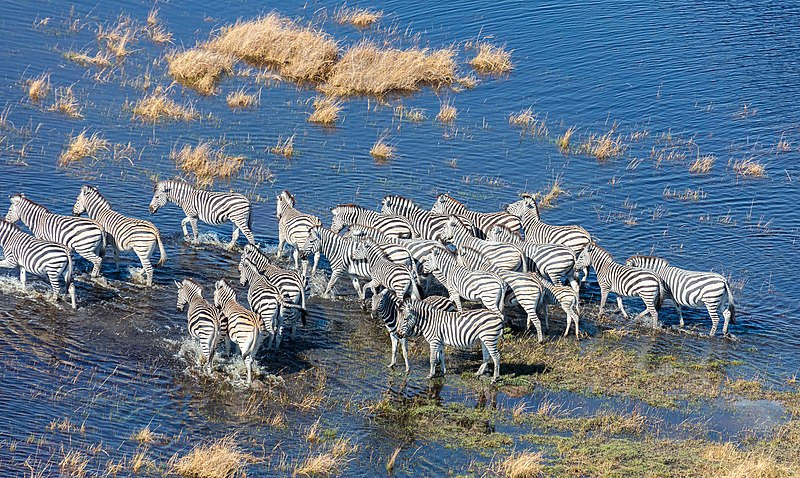 If you need an intimate, unique and unusual approach enjoy a lovely vacation, the Botswana houseboat safari is the real deal. They are custom built to suit the needs and requirements of its customers. They have a bar and lounge; together with sun decks that have a pool and loungers.

Once aboard the Botswana Houseboat, expect plenty of rest and relaxation offered by a chef, a guide and housekeeper. There also motorboats available for birding, fishing trips, game viewing, and a personal guide is always on standby to escort you on your trips.

Named after an 1880 tribal chief, Gaborone is the capital city of Botswana and has all the facilities you can expect of a modern city. It has good casinos, cinemas, hotels, restaurants and night clubs; where you can catch up with live music from the country’s local artists.

Once in Gaborone, make time to visit the National Museum, which has a collection of fine art, traditional crafts and information about exciting aspects of the country.

As you exit Botswana via Sir Seretse Khama International Airport – the country’s international airport located about 15 kilometres from the capital city – do forget to carry Thamaga bowls, platters and goblets. They are known for their thick blue glaze. This pottery is lovely to keep as a souvenir; to remind you about Botswana – The gem of Africa.